It has been a strange couple of months, what with the current Coronavirus epidemic raging around us, but I have managed to capture a few astronomical events from the garden in any case. So here begins the April 2020 roundup.

The International Space Station has made a number of bright passes in the evening skies for the last few weeks. 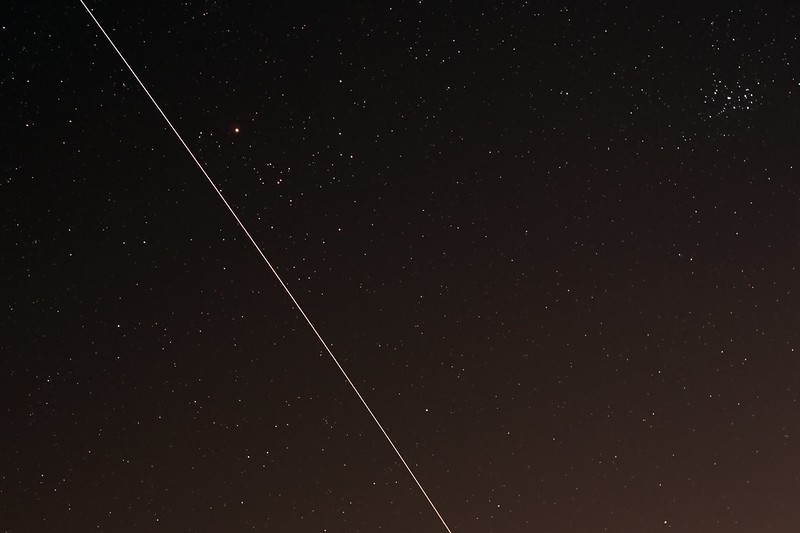 This is a 90 second exposure at f/3.5 with an astro-modified EOS 450D and a EF50mm f1.8 II lens, at ISO 800 with a polar aligned mount tracking at Sidereal rate. In the top right corner of the frame is the Pleiades open star cluster (M45), also known as the Seven Sisters. The path of the ISS itself goes just to the left of the red giant α Tauri, Aldebaran which is the brightest star in the constellation Taurus. The stars scattered in and around Aldebaran are known as the Hyades, one of our closest open clusters, at approximately 153 ly distant. 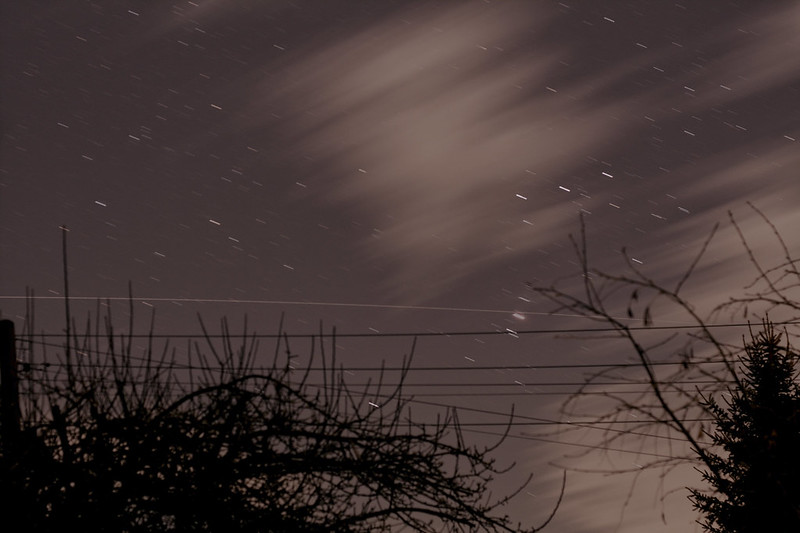 Low ISS pass taken 2020-04-01 at 20:36:38 UT on a (static) tracking mount. It is an 82 second exposure at f/3.5 with an astro-modified Canon EOS 450D and an EF50mm f1.8 II lens, at ISO 400. As can be seen the stars have trailed due the static mount, however a constellation can still be seen; Orion appears in the right hand half of the frame, complete with the very bright Orion Nebula (M42) making a fuzzy patch just above the electricity cables.

With quite a few clear evenings in March and April this year, the Moon has been a very prominent target. 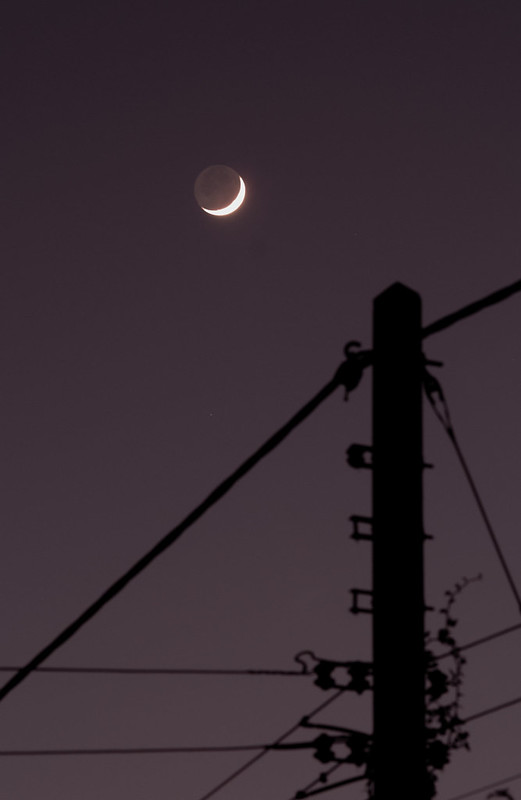 I quickly set up in the garden for the above picture of the Moon with the express hope of capturing some earthlight. Picture taken with the Canon EOS 450D on a tripod; a 4 second exposure at ISO 400. Cropped and played about with a bit in Affinity Photo.

The full Moon in April was known as the "Pink Moon" and was also a "supermoon" due to its ever so slightly larger appearance; a result of the Moon reaching perigee in its orbit of Earth. 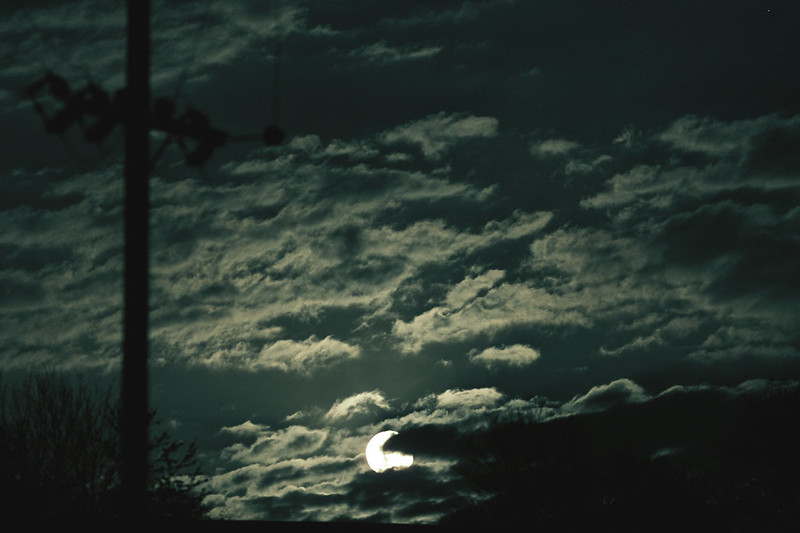 Nipped outside to take a chance picture of a rather young Moon on the evening of the 25th April. 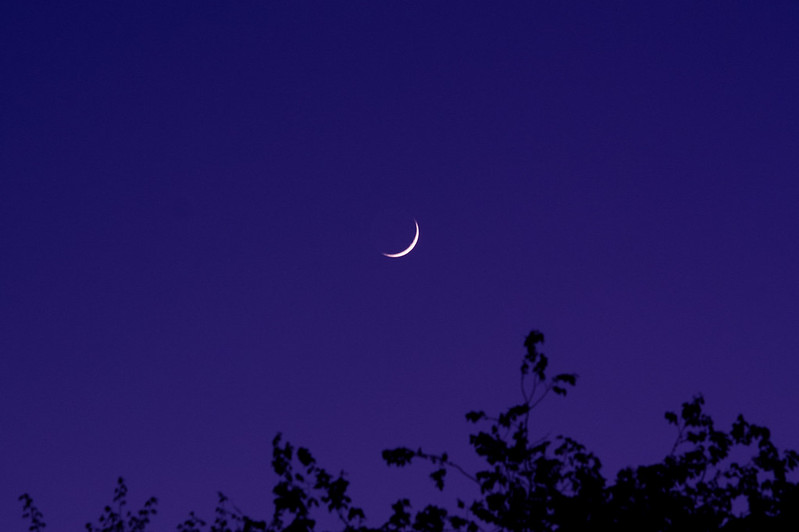 As luck would have it I inherited an old Canon EOS 550D with a Sigma 70-300 mm lens. Below is a first light attempt with the Moon. 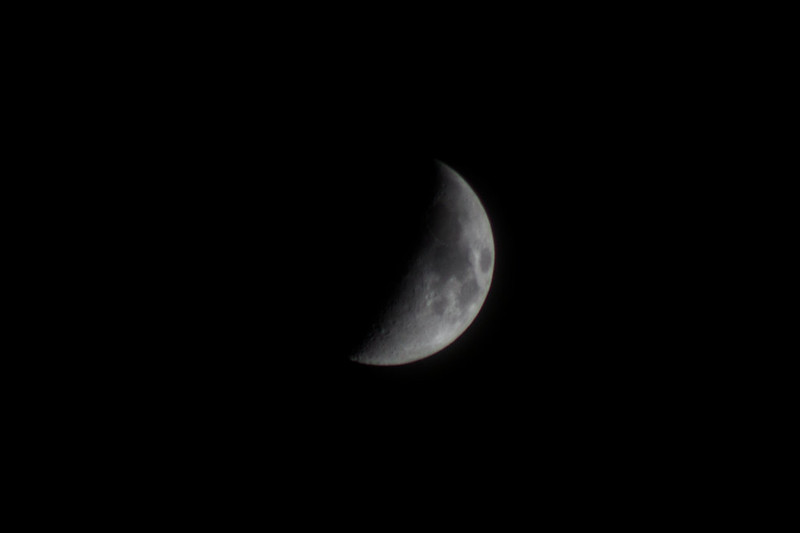 Above we can see the Moon waxing towards half with a 1/125 second exposure at ISO 800. Moon phase is 39%, Moon age is 6.3 days. Cropped and played about with a bit in Affinity Photo.

This year I decided to have an attempt at getting a picture or two from the annual Lyrid meteor shower; capturing a meteor is something I have never tried before. The obvious solution seemed to be to aim a camera at or around the radiant area in the sky around the constellation of Lyra.

The Lyrids are visible from around 16th April to the 26th April, peaking typically on the night of the 22nd April.

In order to have the best chance of getting a meteor I figured that seeing as much of the sky as possible would be sensible. So it was time to bring out the F3.5/8 mm UMC Fish Eye lens and have a few hours under the stars. I decided to put the camera (Canon 450D astro-modified) onto the Skywatcher Star Adventurer mount in order to track at Sidereal rate. Some test pictures were taken initially, mainly to test various exposures, times and angles on the sky.

For all three nights the camera was controlled using a laptop running a piece of software called Astrophotography Tool.

I set the camera running at 23:05 UT with a planned sequence of 100 exposures, 120 seconds each at ISO 800. Unfortunately I had accidentally set the aperture to F/22 whilst setting up in the dark. Not much was captured this night as a result.

This night, I made sure that the lens aperture was set correctly at F/3.5!

Below is a single exposure, taken from a series of test exposures, 120 seconds at ISO 800. Stacked using Deep Sky Stacker, finished off using Affinity Photo in black and white. 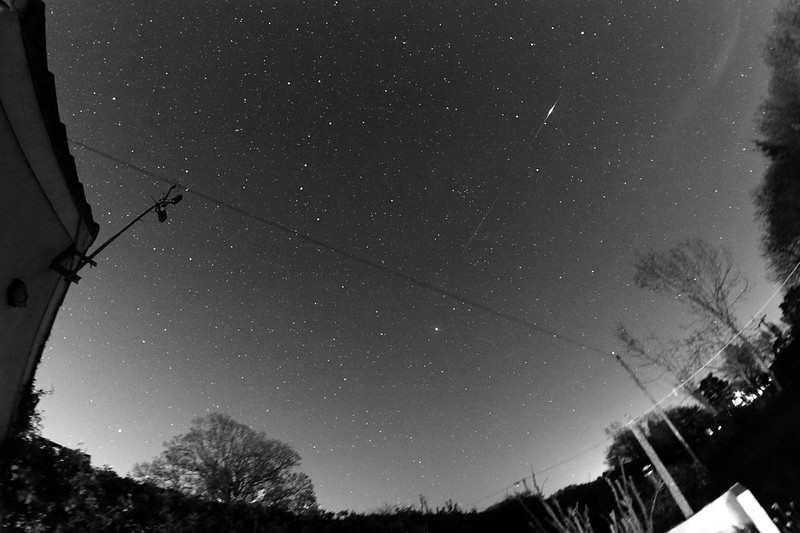 The wide angle lens takes in the long track of the meteor rather well; the track stretches from the constellation of Boötes, right across Coma Berenices and into Leo where it finishes in a flash.

Happy with the tests, I set up for a series of exposures aimed at capturing the post midnight peak - starting at 23:04 UT and running until 03:20 UT. The sequence consisted of 102 files, 150 seconds each at ISO 800 when complete. Not a single frame had captured a meteor.

My luck was in; a third clear night in a row! Once again the camera was set up with the fish eye lens, however this time I started a little earlier due to some incoming cloud later on in the night. This nights' sequence planned in a series of 101 exposures, 152 seconds each at ISO 800 from 21:26 UT to 01:41 UT the following morning.

This night proved to be moderately more successful with two meteors captured. neither were awe-inspiring, but I was happy with having at least something at the end of the session. 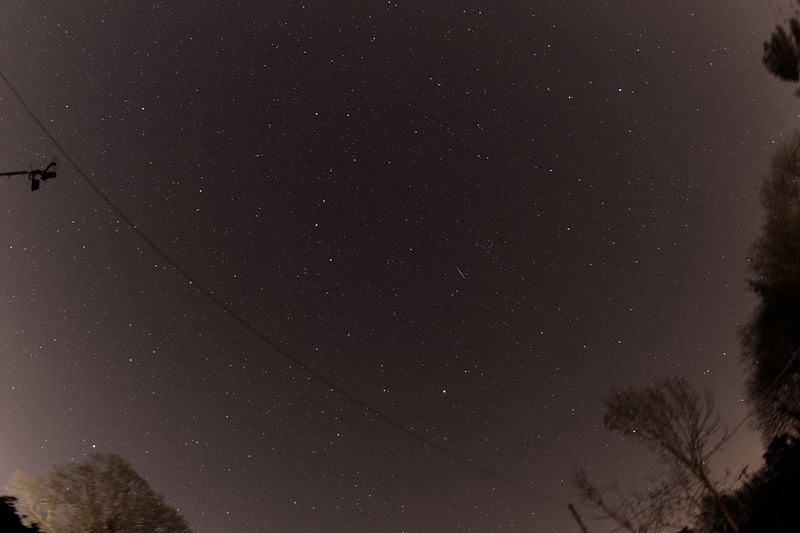 So you have to look quite hard to see this first one (picured above), just to the right of centre of the frame, making its way through the constellation of Coma Berenices. 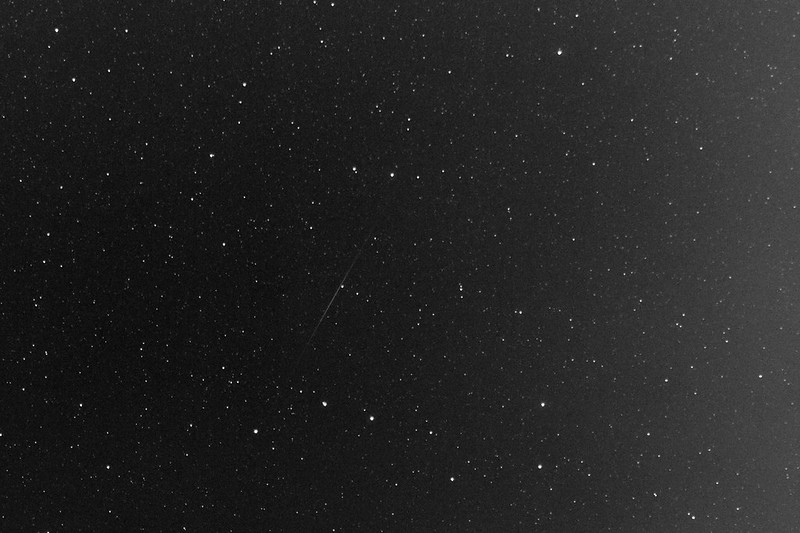 The second capture took place the other side of midnight, streaking a 26° long line between the stars of Alkaid (η UMa) and Kochab (β UMi). The image above has been cropped quite significantly and changed to black and white from a colour exposure using Affinity Photo.

That was it for the Lyrids this year; quiet and nowhere near as exciting as it could have been, but it does seem that most meteor hunters had a similar experience. Roll on the next meteor shower.

Having recently got hold of a fish eye lens I thought that it would be interesting to leave the camera pointing at the sky, take a series of reasonably long exposures and stack them together to generate some star trails. Being that the stars move approximately 15° per hour, it made sense that even a short amount of exposure time would produce some reasonable star trails. 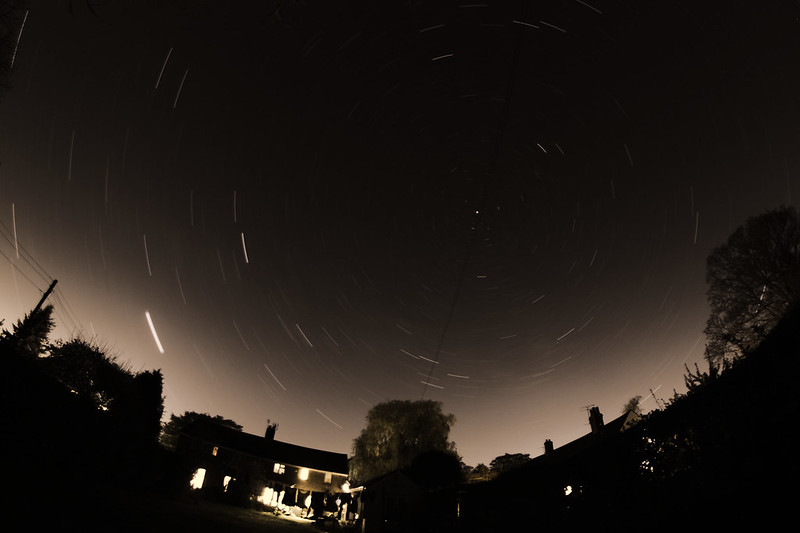 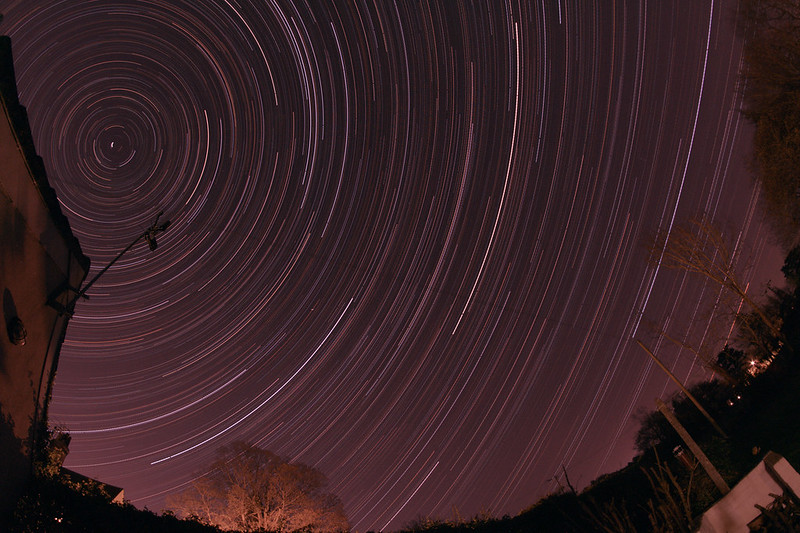 This second image is a composite from a sequence of 102 exposures at 150 seconds each, ISO 800 from one of my attempts to capture meteors during the Lyrid meteor shower. Again these were taken with the Canon EOS 405D and F3.5/8 mm UMC Fish Eye lens No meteors imaged, but a good set of star trails nevertheless.

Rurally based hobby cloud dodger / watcher interested in Astronomy, Astrophotography, Electronics & the ever changing UK Weather in the skies over Northern Lincolnshire